How Islamic Is Critical Race Theory?

How Islamic Is Critical Race Theory?

Critiquing ideologies is often mired by oversimplification. And, such critiques, likewise, result in the terms under scrutiny being stigmatized along with their advocates. This applies to ideological targets like Marxism, socialism, feminism, and critical race theory. Whenever one wants to make short work of another’s perspective, all one needs to do is scream, “Marxist”, “Feminist,” or “Critical Race Theorist.”

The problem with ad hominem aspersions is that these ideologies contain ideas, which conform with the values of their audiences. Had those ideas not been present, the ideologies would not be attractive. Take, for instance, the fact that feminism, especially in its earliest waves, promoted women’s agency, self-determination, suffrage, and the right to own and earn wealth. There’s no fundamental or valid reason to believe that Islam is opposed to such aims. So, it makes sense that many Muslim women, unwittingly, refer to themselves as feminists. One, however, must take care not to assume that such a label sufficiently summarizes the mission of the Prophet Muhammad in light of his embrace of the betterment and social well-being of women. Such characterizations are a danger, which could lead one to blasphemy.

One must, also, remain skeptical of the putatively inherent and universal applicability of such overarching ideologies since one can mistake the forest for the trees, considering that their epistemic foundations often clash with Islam’s moral vision and truths. Like other egalitarian ideologies, critical race theory has its own metaphorical wheat and chaff. And, there seems to be a growing interest in CRT among Muslims in activist circles. Many have adopted its assumptions unwittingly, completely oblivious to what guides the decisions of their so-called political “allies.” For these reasons, I’ve decided to pen together a few words that will, hopefully, provide a shimmer of guidance on this topic.

Click HERE to read the rest of the article 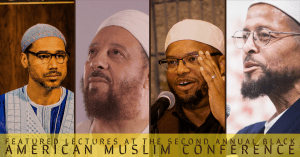 Lectures, Panel Discussions and more of the Second Annual Black American Muslim Conference. Click the image above to find out how you can get your copy of this historic event.