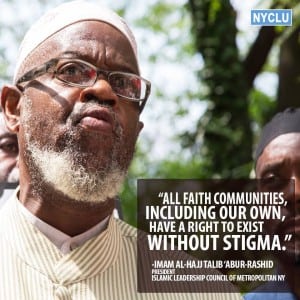 In this exclusive Lamppost session, Imam Talib Abdur-Rashid explores how Muslims in New York responded to the violation of Muslims civil rights by the NYPD. Excessive use of force, spying, ‘stop and frisk’ were a few of the abuses of the the NYPD. Imam Talib talks about the variegated responses of the Muslim community to the aggressive approach and tactics of the NYPD. Imam Talib is an expert on Police brutality with years of of activism against the excesses of the New York Police Department (NYPD).

Imam Al-Hajj Talib ‘Abdur-Rashid is the religious and spiritual leader (Imam) of The Mosque of Islamic Brotherhood Inc. The mosque , located in Harlem, New York City, is the lineal descendant of the Muslim Mosque Inc. founded by the late El-Hajj Malik El-Shabazz (Malcolm X), in 1964. Imam ‘Abdur-Rashid is also the Amir (President) of the Majlis Ash-Shura (Islamic Leadership Council) of Metropolitan New York. Nationally, he serves as the Deputy Amir (Vice President) of The Muslim Alliance in North America. See the Imam’s full bio here