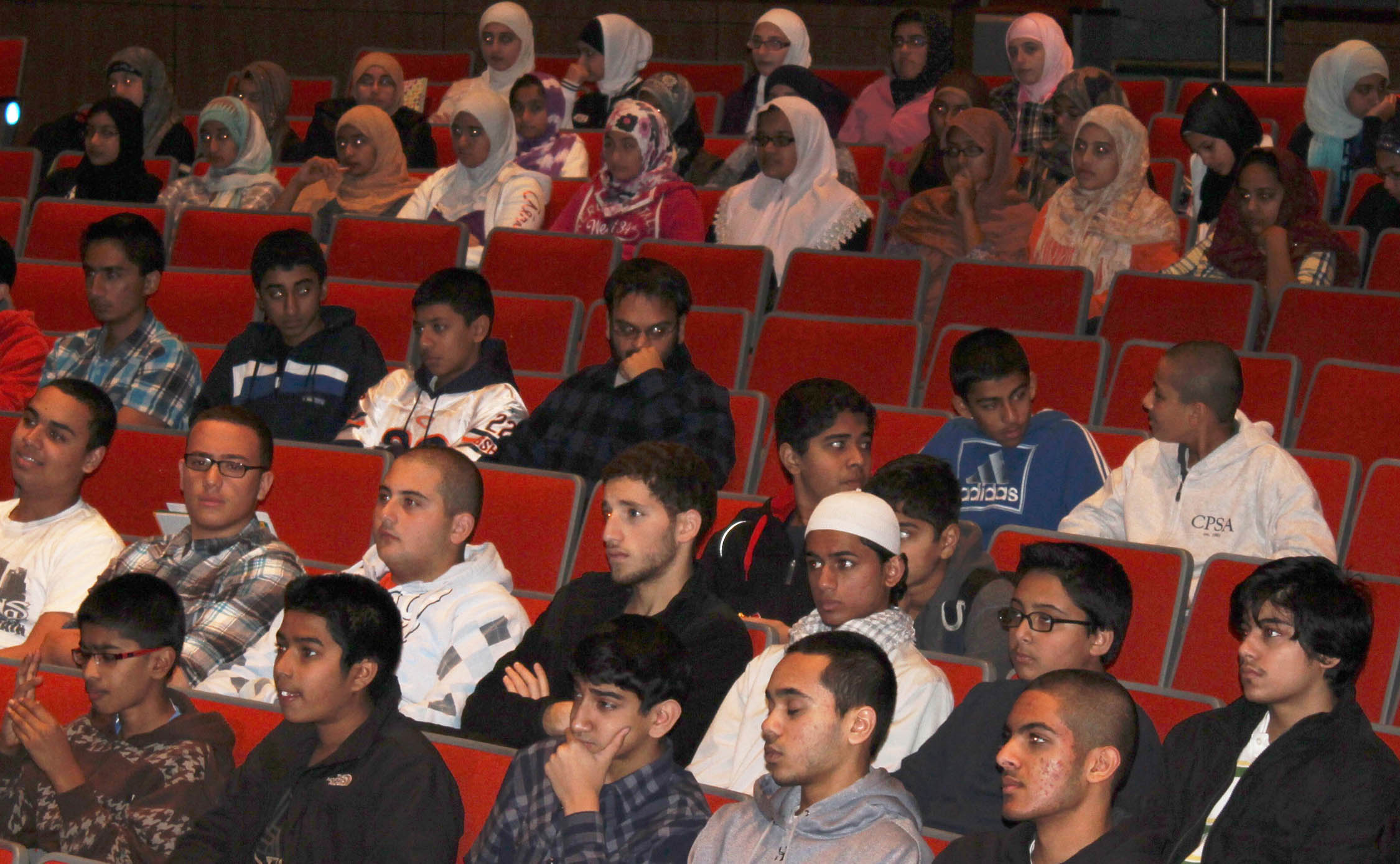 When I reflect upon growing up in a community of Muslim converts struggling to find their place and voice or to simply identify what group of Muslims from “over there” were most worthy of imitation, I have found most conversations occupying the energies of Muslims to be never-ending circuitous paths to nowhere. I am deeply grateful to God for placing me in the generation to which I belong, since the challenges to being a good Muslim for me were far less threatening to my mental or spiritual stability. Sure, I had my share of smoking, drinking, partying, and enjoyment of the nightlife even as the child of Muslim parents. But, once I made a commitment to return to God’s path, the challenges to me making that transition were miniscule by comparison with what many Muslim youth are faced today; challenges that originate both from the general society and the religious community.

During the earliest years following my conversion experience, you see, there weren’t many conversations about the obligation of wearing a beard or talk of the unlawfulness of music. I, myself, being a music fan—and member of my own hip hop crew—found it easy to stop listening to so much music (both the innocuous kind and the more deleterious), not because someone told me not to or that because it was haram (unlawful). It was just a natural part of the process of becoming more and more interested in memorizing the Qur’an and learning more about Islam. The same is what happened with my interest in sports; something about which I hardly know anymore outside of occasionally catching the rerun of a boxing match or UFC full-contact fight.

The biggest challenges to my Islam were drugs (of course) and girls. I gave up narcotics very early, and committed myself to celibacy until marriage. My siblings scarcely remember my more reckless days now, and at one time because of not having a girlfriend certain members of my family even asked me whether or not I was gay. I think if they really think hard about my past, they’ll see a wonderful lesson of transformation, and a salient reminder that change is real and possible.

Moving from Chicago to Philadelphia made the threat of me losing my life through gang affiliation. And thank God we did move! Because 11 years old is far too young to be thinking seriously about coming back when the time is right to kill the individual who jump-kicked me and nearly took off my head with a large brick just because he couldn’t find my older brother who was better than him at using his hands. Yeah, that’s what we did back then. We fought. We used our hands, and it was actually the guys who weren’t very adept at it who first adopted the use of “hammers” to equalize their strength with their opponents. But I digress.

In the Muslim community, one of the most important issues was distinguishing ourselves “superficially” from the “Kafirs.” So if you came to the masjid out of “uniform”, you might get questioned, “Where’s your Kufi, Akh?” Those days were a lot simpler, because at least there was a sense that in spite of our differences, when things really got bad, the brothers had your back. Those days seem long gone. Nowadays, the pressure from government and the desire of so many of us to be “accepted” by the dominant culture makes it easy for one of us to throw another under the bus even though in most cases the one for whom we performed this act of treachery soon after disposes of us for our hypocrisy. Nobody likes a hypocrite precisely because he/she cannot be trusted.

Our greatest problems started in the early 90’s with the rise of the Salafi Movement which eventually incited a reaction called “Tradition Islam.” Prior to the rise of Salafism, it was easy dealing with difference in the convert community. But as more and more people became Muslim and were indoctrinated into Salafism, it seemed the local leadership could nether keep with the pace of conversion nor the sophistication of the Salafi teachers.

With Salafism came the focus on God’s “direction”, “place”, and “physical attributes” (e.g. hands, a face, eyes), and the “obligation” of all Muslims believing in such teachings without which they would find their faith and salvation in peril of loss. Additionally, there came condemnations of the 4 Sunni Schools, Sufism, and a common campaign to rid the Umma of “perceived” innovation (bid’a).

By the late 90’s a new “Traditional” movement in response to Salafism taught that God is without place and that to speak of God literally having hands, eyes, etc. was to speak blasphemy against the Creator. They also taught that it was “compulsory” to follow one of the 4 Schools, that Sufism–rather, following a sufi order (tariqa) was compulsory, and that innovation was much broader than the Salafi limited and myopic rendering.

Though there were times when it was possible to view both factions in pseudo-monolithic terms, today it is much harder to make such sweeping generalizations about either of them. Largely, there are elements from both that have turned in against one another questioning the validity, authenticity, and sometimes faith other their brethren.

In the midst of this turmoil and confusion post 9/11, others have begun to rise in prominence especially in light of the fervor connected with the first “black” president of the United States. Other than the prominent apostates who are constantly showcased in the mainstream media as the greatest authorities on Islam and those most fit to lead a “reformation” of the Islamic teachings to make them more congruent with the secular state, there are others amongst the so-called “Progressives” or “Moderate Voices” who promote alterations to historically non-negotiable Islamic teachings (e.g. queer relationships). Many of these “Progressives”—most not being rooted in classical scholarly tradition, daringly critique the ancients without consideration of the contexts within which they lived nor the general moral sensibilities the world over during their times.

Many of our youth today, after inheriting disdain for classical scholars and scholarship from their parents (and also because of the misguided teachings of some of those who are classically trained), find themselves confronted with troubling philosophical discussions in Western universities, and, especially, the ideas related to the New-Atheists. Some of them are troubled enough to doubt the authenticity of Islam and its universal truths, largely because they never were afforded the opportunity to study classical Islamic dialectics, logic, and/or dogmatic theology.

Add to all of this the new COINTELPRO operation that has intensified under President Barack Obama’s administration that unfairly targets young and older people of brown and olive colored skin for entrapment. This is so despite the fact that President Obama has appointed, perhaps, more Muslims to his cabinet than any president before him, which begs to question what benefit or use is there for Muslims to seek so much closeness to our political leaders? The Prophet Muhammad—God’s blessing and peace on him—warned that, “Whoever grows in closeness to the sultan, grows in remoteness from God.” I’m not saying that Muslims should not be doing things to protect their rights. I’m simply saying that it’s important to remember NOT to believe in the justice of this system more than those who run it.

Under these circumstances, one must honestly ask him/herself as a parent, “What will my child’s self-esteem be like growing up in a society with so many pressures, and what am I or am I not doing to negatively contribute to their sense of identity?” It’s no wonder that so many young Muslims polled by Gallup suffer from depression these days. Have we lost or way? Or is that we never really had it? Are Muslims “just like” other Americans, or do we really sit upon an extremely rich moral tradition that we believe will and can help America (and the “West” by extension) as a whole to improve itself?

I , personally, refuse to allow my own children to grow up in fear, and to believe that there is NOT something special about them being Muslim. A little courage can go a long way. Remember that we may win the world and the acceptance of people, but if that incites God’s anger, it means nothing at all in the end. The end and final victory belongs to the God-conscious. Remember that.

Is the extent of your Islam your beard, your hijab, your niqab, or all about the way you pray? Is your Islam all about being “right” about the way you conceive of God? Is it about the clothes you wear or the length of your garments? Is it about proving how “firm” you are in your faith by proving that you’re not supposed to attend the funeral of a non-Muslim relative; not give a non-Muslim salaam; to argue about the ruling of praying in the masjid (even if you will unlikely commit yourself to doing so)? Is it all about showing how much better a Muslim you are than the next person by public conveyance of slanderous remarks unsubstantiated by trustworthy witnesses? Is it all about being on the right minhaj or following the right people, madhhab, tariqa, or shaykh? Even better, is your Islam just all about the amount of controversy you can stir up with the intention of impressing non-Muslims in light of your desire for acceptance?

Whatever and however you might characterize your definition, understanding or the aims of Islam, one should constantly remember that Allah (sanctified and glorious is He) told us in a divine tradition, “O my servants! Verily, you are all misguided save those who I have guided. So seek guidance from Me, and I will guide you.” To me, this is a reminder of the fact that there are layers upon layers of darkness (zulumat) while the light is only one. I recall my days of misguidance, and what they teach me is that when you are misguided, you don’t even know it. So, humble yourselves, brothers and sisters! Remember that Islam is firstly and lastly all about you and becoming a better person. Let’s make it easier for one another. But, most importantly, let’s do our best to make it easier for the current generation who are tried by so much more than many of us who never experienced the amount of information overload available to us now.