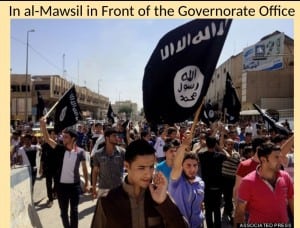 According to several news reports, President Barack Obama has ordered an additional 1500 troops to Iraq to train and advise Iraqi and Kurdish forces in the fight against militants from the Islamic State of Iraq and Syria (ISIS). He is also going to request from Congress an additional 5 billion dollars to set up operation and training sites in Iraq. What is it about ISIS that justifies such massive expenditures? What do we really know and understand about ISIS? For Muslims, how do we assess them in terms of our religion?

For answers to these questions, Lamppost presents an exclusive presentation with Dr Khalid Yayha Blankinship.

In ‘What is ISIS’ Dr Khalid Blankinship provides a rich and detailed exploration of the origins of ISIS, the context by which we should understand ISIS, the real danger that ISIS represents to Islamic beliefs, the goals and aims of ISIS, and much more.

Dr. Blankinship also responded to several questions after his powerpoint presentation. One of the questions: “What do you say to those who say that the US has a ethical responsibility to those massacred by ISIS?” Listen to Dr Khalid’s response here:

“Why do the Iraqi Arabs support ISIS?”

Dr Khalid Blankinship is one of the foremost Islamic Historians in America today. He obtained his BA in History in 1973 from the University of Washington, an MA in Teaching English as a Foreign Language in 1975 from the American University in Cairo, and an MA in Islamic History in 1983 from Cairo University. His Ph.D. in History is from the University of Washington in 1988. He has also studied with a number of Muslim religious scholars, especially Shaykh Ismâ‘îl Sâdiq al-‘Adawî (1934-1998), the Imâm of Masjid al-Azhar in Cairo, and he has made the acquaintance of many well-known scholars of the Muslim world